Bedham is a remote wooded hamlet to the north of Fittleworth civil parish. It is partly in Fittleworth Parish and partly in Wisborough Green Parish, with a mixture of high Wealden ridge and deep valleys.

Bedham Lane (aka ‘Road’), is an ancient route that leads from Hallelujah Corner in Fittleworth village, north through woodland, towards Wisborough Green, weaving in and out of Fittleworth Parish along Wakestone lane.  A A small track off Bedham Lane leads to Brinkwells. This is the cottage rented between 1917 and 1921, by composer Sir Edward Elgar, that was sublet to him by artist Rex Vicat Cole (see Fittleworth Arts and Artists). Near Brinkwells is Spring Farm once home of farmer Thomas Aylwin with his pony and trap, who used to collect Elgar from either Pulborough or (as it was then) Fittleworth Station. The studio used by both Elgar and Vicat Cole, originally in the garden at Brinkwells, is now in Wakestone Lane, Bedham, renovated and extended.

A small forked lane from Wakestone Lane, near Bedham Farm, leads downhill to a number of timber-framed, 17th and 18th century or earlier, cottages that once housed charcoal burners. One cottage (now ‘Cotford’) was home, at the same time that Elgar was at Brinkwells, to writer Ford Madox Ford and his Australian partner, artist Stella Bowen. Stella later became a WWll war artist. 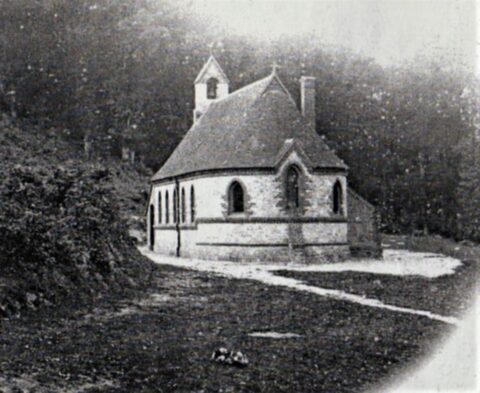 Bedham’s population was large enough in the 19th century for a chapel, St Michael and all Angels, that combined use as a church on Sundays, with weekday use as the hamlet’s school. The Mitford family were local landowners; various 18th century negotiations over the use of the woods and discussion of the rights of local workers are recorded. However in 1880 William Townley Mitford was responsible for building the chapel/school (pictured) with Fittleworth rectors taking Sunday services. The school finally closed in 1925 and use as a church ceased in 1959. Elgar’s wife Alice recalled hearing the Bedham church bells ringing out, with the signing of the peace treaty in 1919. It was finally abandoned after the great storm of 1987 and is now derelict.

There are a number of references to archaeological finds and the Mitford associations on the Fittleworth DVD and in the village Archive. The parish includes part of Flexham Woods and part of The Mens ancient woodland, a Site of Special Scientific Interest.

A view from Bedham towards Wisborough Green